“So scared of getting old, I’m only good at being young,” John Mayer could not have said it better (go listen to Stop This Train if you haven’t, awesome song). Anyway, that sums up my whole life. I’m that 20 year old girl who doesn’t want to grow old (ever), or make serious decisions about life such as having kids, and wonder who, what, where, and when I will get married, and what my future would be like seven years from now. I am a sail with the wind type of girl, free-spirited, with strong principles I adhere severely to, even when I am slapped in the face with adversity by this beautiful thing called Life. I live in the moment, yet I know what I know from life- a job where I can sing with my co-workers doing work hours, dress the way I want, travel a lot doing work, and organizing charity events by the side.

I entered college with just one thought, which was never to take summer school. I remember telling my father and expecting him to give me a boring talk, but instead he gave me the best advice ever. He said “you do what you have to do, study hard, and play just as hard. You might think you have your whole life ahead of you but college truly is the best time.” I agree with my father, and I’ll miss complaining about classes, the professors, and making it seem like I had the hardest life ever. I’ll also miss starting papers three hours before they are due after downing red bulls, and five hour energy drinks, or partying during the week knowing that I have an 8am class the next day. These were the worst yet best times of my life, looking like a bum after pulling an all nighter, and praying to have the strength to make it to class in one piece. The frustration of doing class projects, and the feeling you get when you pull through; these times were really the worst yet best times of my life. Also, attending Temple University, which is one of the most diverse colleges in the nation has given me a broad view of the world and different cultures. I leave college knowing this awesome part of my life is over, and the greatest moments are yet to come. I think I am somewhat prepared for the real world which I am going into expecting the worst so nothing faces me (…till I have no money to shop or go to New York regularly *weeps*). I know I probably wouldn’t get the type of job I want right away especially as a Broadcasting, Telecommunications, and Mass Media major with interest in fashion, mixing drinks (I hope to own my own special bar some day), and writing fictive short stories but I also have hope that I could be one of the exceptions, you just never know, and that’s the beauty of being a communication major.

Nevertheless, I am excited to take up this challenge to prove myself, while basking in the mystery, which is where I’ll end up tomorrow, but one thing is constant, I was TUmade, and will always be an owl… Let’s go Temple *clap clap*
Congrats Class of 2012. We made it. 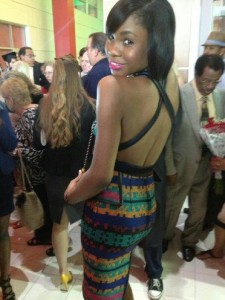 My Time Spent Inside The MTV Studios