Cady Heron: The heroine and lovable protagonist, Cady followed Aaron to Northwestern where she majored in math. While she stayed at the top of her class and joined all sorts of extracurriculars (African Student Association, Math Club, etc.), Cady also partied hard, and Aaron grew tired of her word vomit and actual vomit. They split after her freshman year, and she’s currently a single high school math teacher. Cady may have traded her pink, pleated miniskirt for sensible clogs and pullover sweaters, but she remains a regulation hottie to this day. Sometimes her students run into her at the local FroYo establishment, and they remark that it’s like seeing a dog walk on its hind legs.

Regina George: Regina got a lacrosse scholarship but ultimately decided to focus on her sorority life. Remember that mean sorority girl email that went viral a while back? That was actually Regina George writing under a pseudonym. She may not have wanted to make “fetch” happen, but she sure did her part for “c*nt punt.” Today, Regina runs a popular internet snark forum and bar tends on the side. She sucks at making almost every drink, but they keep her around because she’s like, really pretty.

Gretchen Weiners: No one would have ever guessed that Gretchen Weiners could be successful (she certainly wasn’t when it came to Candy Grams, amirite?) but she’s currently climbing the corporate ladder, working in “logistics” for a Vietnamese manufacturing conglomerate. Already fluent in Vietnamese and with several years of business experience under her belt, Gretchen’s career really took off after she read Lean In and realized her evil male boss was basically just a less hot version of Regina George. Today, there is no stopping Gretchen Weiners or her shoulder-padded bidniz suits.

Karen Smith: Surprisingly, Karen did not pursue a career in meteorology or even television. Instead of going to college after graduating from North Shore High, Karen decided to take a year off to find herself. She took a trip to the Caribbean with an unnecessarily large group of other blonde girls shortly thereafter, where she met a wealthy “Wall Street type, aka my type!” whom she later married. Karen is now pregnant with her second child and has become basically Mrs. George. Her transformation will be complete once she undergoes breast augmentation surgery, which is scheduled for some time this summer.

Ms. Norbury: Still a teacher at North Shore High, Ms. Norbury occasionally runs into Cady at Mathlete competitions and other industry events, where they exchange pleasantries and discuss the weather. She had a brief fling with Mr. Duvall, which started when he saw her crying into a box of donuts in the teacher’s lounge following her drug pusher charges. A caress of the face, some sweet nothings, and a “what about what happened to Coach Carr?” was all it took before the two had crossed all employee-employer lines. The fling didn’t last, and Ms. Norbury is again alone. She’ll always have her donuts though.

Mr. Duvall: He became disillusioned after the girls of North Shore High went wild, and after his failed tryst with Ms. Norbury, he returned to the south side, whence he came. He breaks up fights and has students arrested for drug possession on a regular basis, but he finds it enriching because he’s working in an underserved community, instead of Evanston.

Damian: It turns out that Damian wasn’t actually too gay to function. He’s now working as a correspondant for E! News, making jokes like “Oh my God, Danny DeVito! I love your work!” to Tom Cruise, Snooki, other vertically challenged celebrities, and even Danny DeVito himself, who didn’t get the reference. Damian is gunning for a spot on the hit show Chelsea Lately, partly because he’d like to use his signature joke on Chuy, and partly because he’s hilarious and knows more about celebrity gossip than even Perez Hilton, his one-time role model.

Janis Ian: Janis returned to her roots in art school and focused her senior thesis project on Lebanese women in art. She is now the premier Lebanese artist and curator of the Lebanon collection at the Art Institute of Chicago and is basically just really big into the art scene. Janis keeps in touch with Damian and Kevin Gnapoor via Instagram, but otherwise has a whole new set of friends these days. Friends who literally wear wigs made of their mom’s chest hair.

Kevin Gnapoor: Now living in Palo Alto, Kevin G is co-founder of a tech startup that developed a dating/career app that allows hiring managers to meet people on the pretense of dating, and then later choose whether or not to offer them a job based on their date behavior (eg, their date night look, whether they did the wallet reach, how they treated the waiter, etc.). The app is based on ground-breaking research from Stanford that found that bosses were less likely to sexually harrass someone they’d already dated. Kevin G’s life is currently very similar to that scene in The Social Network where someone zip lines into a pool and destroys a chimney. He has even been known to bust a rhyme at house parties.

Shane Oman: Regina’s on-again, off-again boy toy now works at the local Radio Shack peddling…whatever it is they sell at Radio Shack. At night he plays Call of Duty with his roommates and occasionally washes his dishes. He’s pretty content. 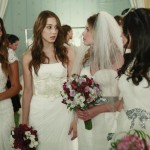