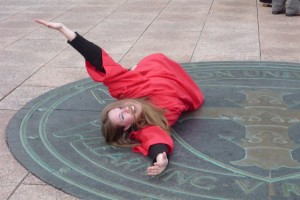 To talk about my year since graduation, I have to back up a couple months before Pomp and Circumstance blasted through soccer stadium speakers.  I was just finishing up the long application process for a summer job in a non-profit organization I had worked for the summer previous.  Since my supervisor and multiple higher-ups had recommended me for rehire, I thought that I had it in the bag.  Then, my phone interview didn’t go nearly as well as I’d hoped, and my coworkers from last summer began hearing about their new positions, and I finally got my phone call: No.

I was devastated.  I had worked so hard to build my resume so I could be a better employee for the organization.  I had written drafts and drafts of the application.  I had rehearsed my interview points for days, even weeks.  Even though it was just a summer gig, didn’t pay well, and wasn’t in my field, that job was all I had pictured myself doing after graduation. 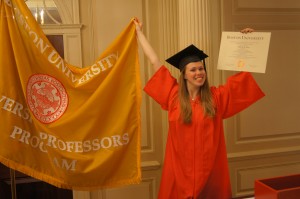 Now what the hell was I supposed to do with that?

With no job and no fiscal assets to speak of, I begrudgingly moved back home with the folks.  This, of course, also meant moving back across the country, three thousand miles from all my friends and everything that had been a part of my life for four years.  I was still mildly depressed about my job rejection, and the Facebook updates from my old coworkers in their new jobs didn’t help.  Still, I tried to make the most of it.  Since I had extra time that summer, instead of flying from Boston to California, my dad and I took an awesome, two-week road trip across the country.  Of course, when I got back to the Bay Area, my job search had to start again, this time in full gear.

If you would please refer to the title of my major, this will give you a pretty good idea of how well that went.

I’ve always been used to keeping incredibly busy.  I like to say, if I’m not doing everything, I won’t do anything.  So now I, with no local friends and no job, began to get incredibly bored.  I started babysitting again and volunteering more with my church.  I worked on my graduate school applications.  I decided at the last minute to audition for a local production of Hairspray, and I managed to grab a spot in the ensemble. 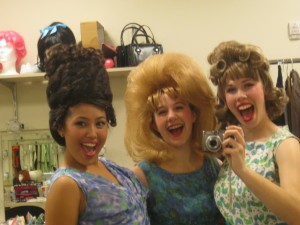 I do not exaggerate when I tell you: This. Changed. Everything.

Rigorous rehearsals got me back in shape.  I stayed active and lost about fifteen pounds.  Not only did I have something to do with my time, but I began to develop friendships with people who *gasp* lived in the area.  I got particularly close with one of the other girls in the cast, and through her met my current boyfriend.  I even reconnected with a friend from high school who was also in the ensemble and happened to work for a local newspaper.  I gave her my resumé to pass along, and I emailed the editor.  By the end of September, I had an interview for a real job in my real field.

I started out as an intern.  It wasn’t a lot of pay, and not a lot of hours, since the paper was in a court battle with a large media group who was trying to buy them out, but I worked really hard, picking up a seasonal retail gig and some other odd jobs to fill in the gaps.  I fell in love with editing, and I got really good at it.  They gave me a couple of writing assignments, and when one of these made the front page, my title officially changed from “Intern” to “Writer.”

For someone who has wanted to write since a fourth-grade limerick assignment, this was closer to living the dream than I ever thought I’d be at this point in my life.  It wasn’t perfect, but I knew I was headed in the right direction. 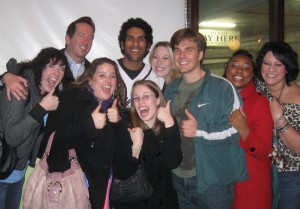 Where am I now?  I’m in California, working, volunteering, and preparing to move out once again.  I’ve taken up rock climbing and giving flute lessons.  I have stayed involved in local theater.  My blog, Cathy with a Why, is starting to grow.  I work almost full-time for a marketing company, and even though it is really not for me, I remain thankful for my employment.  I still work at the newspaper, and I still love it.  I would earn much more if I quit the paper and worked in marketing full-time, but if there is one thing I have learned from moving back in with my family after four years on my own, it’s that your sanity is worth it.  You’re going to have to do things you don’t like, you’re going to get annoyed at your parents, you’re going to have to make sacrifices for the sake of money and independence, which will eventually come.  With that in mind, it’s important to take care of yourself.  Do something you love.  Try something new.  Don’t be afraid to make choices for you.

In the fall, I am heading to Columbia University to pursue an MFA in Creative Writing, concentrating in Fiction.  I am nervous about moving to New York and about having enough funds for school and life in the Big Apple.  But when I get worried, I can look back at this year and remember the biggest lesson I learned: Things will work out, even if it’s not in the way you expect.

This summer?  I applied again to the non-profit, and I got the job.  I start in June.  When I spoke to the program director, he told me that they probably should have hired me a year ago.  I didn’t say but thought to myself:

I know, but I really am grateful that you didn’t. 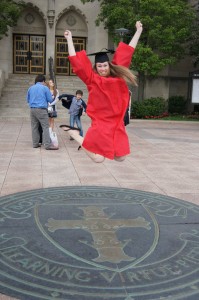 Congratulations, graduates!  Work hard, stay humble, stay hungry.  Take risks and make mistakes.  And remember: Success is not the key to happiness–it’s the other way around.

Boy Bands: We’re So Glad They Came… Back

How to Live Together, Manage Your Money, and Make it Out Alive