After spending my entire college life planning for my future, it’s funny to think that where I am now is so far from where I thought I would be five years ago. When I first started college I was an English major with plans to pursue a Creative Writing degree and eventually become a writer. I envisioned my future self as being a younger version of Carrie Bradshaw: a witty, single, writer making her way in New York City. Unfortunately, the idea that I could actually able to make a decent living as a creative writer, while living in one of the most expensive cities in the entire country, seemed almost entirely fictional. So my plans expanded and I found myself exploring new career options and possibilities that I had never considered before college. I started volunteering with political campaigns. I added minors in Political Science and History to my degree. I began studying digital media. As graduation loomed closer, I was still pretty unsure of what I wanted to do but I felt certain I would find something that I knew would make me happy.

Oddly enough, what I found was my current boyfriend. We had already been dating for a while but it just never crossed my mind that I might actually find someone I loved and wanted to be with while in college. The idea completely clashed with my Bradshaw-esque vision of my young, single, professional self and I had always just kind of assumed that I would have time to develop my own career before getting too serious with anyone else. However, it was during those last few months of school when I started to realize that I felt more certain about him than any career field I had involved myself with so far. So I took a risk and decided to stay in my college town with him while I continued to search for what it was I wanted to do.

It has been one year since I took that risk and I’m still fairly uncertain about what career path I should take. However, I feel more sure than ever that I’m on the right path so far. Right now I have a great part time job that gives me time to continue exploring what it is I want to do and I even get to write creatively like I originally hoped for. My life now might be nothing like the finely tuned plans I had for my future five years ago but that might not be such a bad thing.

If I could give one piece of advice to my fellow grads and post grads based off my experience, I would say that it’s okay to be a little lost right now. We are still young and this may be the only time we will ever have the freedom to take risks and explore our career options before we settle down. So leave yourself open to all of life’s possibilities because you never know where you’ll wind up. 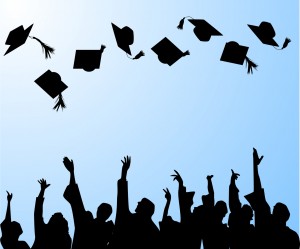 What They Don’t Teach You In College