One of my greatest fears in life, ironically enough, stems from one of my greatest passions.  As a writer, being generic is something that everyone is desperately seeking to avoid. We read the classic authors, study the famous literature, and immerse ourselves in the historical culture of a time when “generic” had no meaning. We are artists who take extreme pride in our work. We spend hours upon hours framing viewpoints, shaping arguments, and discovering new content to explore. If (more like when, especially thanks to Tumblr) another writer comes along who reflects our voice or mimics our satire, we secretly hate them for existing. “What do you mean you have the same taste as me? I’m the original writer who reads Jane Austen and Jack Kerouac. I’m the one who regularly quotes The Great Gatsby and Lolita. How can there be more than one of us?”

Writers of the world, I suggest you take the advice I’ve learned to live by, and wake the hell up. We’re a conglomerate of thinkers. We’re a society of literary nomads. At our very core, we are linked by an incessant thirst for classic, wholesome prose that you just don’t find much of today. So while I understand why the use of the word “generic” can leave a negative ring in some of our ears, take it for what it is: We’ve all got great taste.

That being said, I’m going to talk about the most generic thing possible: life as a post grad in 2012. Oops, I just had to.

For those of you who have read my “Letter to My Senior Self,” the road to graduation was a difficult one, for me especially. I think people often underestimate the notion of college graduation; the feelings, changes, and thoughts that accompany an accomplishment so significant. Well, at least I did. It was only until the middle of April, a mere 30 days before I would walk across that stage to receive my beloved piece of paper, that it all hit me. And when I say hit, what I really mean is that I was run over by an 18-wheeler of emotional baggage. It really sucked. And the only thing that sucked more than that was realizing how much worse it was going to get before it got any better. 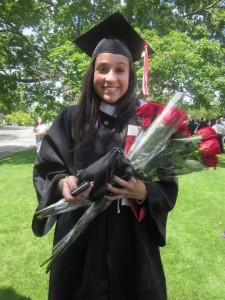 Following graduation, I felt so incredibly, wonderfully, irresponsibly free. It was almost orgasmic. I could go to sleep at the crack of dawn, wake up whenever my pretty brown eyes felt it necessary, and prioritize the rest of my day based on the essentials: Gym, food, friends, and drinking. With the summer season in full effect, job hunting was the furthest thing from my mind…until it became the ONLY thing on my mind.

As anyone who knows me well will tell you, I am a rational and practical person 95% of the time. Spontaneity isn’t one of my strong suits. I practice the phrase “flying by the seat of your pants,” by allowing iTunes shuffle to dictate my musical selection or, this one time, when I gambled and lost 40 bucks at a slot machine in Vegas within the span of 10 minutes. Let’s just say I was in mourning until the alcoholic beverages kicked in (which, thank God, doesn’t take long in Sin City). So when I arose from my post-grad, unemployed-but-don’t-give-a-damn coma, I got down to business.

Like every other amateur job seeker out there, I began the process as a picky princess (unintentional alliteration, I swear). I used advanced search engines to the fullest extent. The job MUST be in NYC, MUST be at a magazine, and MUST be in an editorial or features department. In my mind, there was no such thing as compromise. Maybe I wasn’t fully paying attention to the state of the economy or job market in America, maybe I drank too much liquor to celebrate my precious diploma, or maybe I thought I was special. Whatever the case may have been, my princess-like criteria got me nowhere, and fast.

It was time to start expanding my horizons. I contacted all of the people I met through past internships, hoping beyond hope that someone would know someone, who might know someone else, who had a job for me. I updated my LinkedIn profile, touched base with Alumni from my school, and reached out to potential employers. I set an alarm, grabbed coffee, and spent hours on MediaBistro, Ed2010, and hundreds of company websites looking for entry-level positions. I edited my resume and cover letter until my eyes got dizzy from staring at the computer screen for too long. I became an expert at job hunting. And for what? For emails with no reply, for family and friends to constantly reassure me that “I’d find something,” and for an entire summer to pass by with me STILL being an unemployed graduate.

It was a terrible feeling. I remember reading horror stories of post grads moving back home and not finding a job for a year. It happened to a ton of my friends who graduated the year before I did. It touched upon all sectors of the country. Male or female, old or young, Republican or Democrat, Degreed or Non-Degreed, people were running into dead ends when it came to finding a stable job. And yet, in the midst of all that I knew, I never thought I’d be one of them.

Well not only was I “one of them,” but I was the whiniest “one of them” to ever live on this Earth. Day after day, I moped around my house as if I JUST finished reading My Sister’s Keeper for the first time (if you weren’t bawling by the end of that book, you can’t possibly have a functioning heart). Despite the generous amount I saved from graduation and old jobs, my money situation was becoming a concern, and I was forced to get a job locally. Of course, I found one within days of looking, because retail is always hiring. I could probably write a month’s worth of blogs describing why I despite working in retail, but that’s for another time and place.

For three grueling months, I spent my days (and many a night) helping customers find souvenirs, folding graphic t-shirt after graphic t-shirt, and cleaning the bathrooms at Orange County Choppers. I’m sure some of you have heard of the TLC show about the father/son ex-trio from upstate New York that creates custom motorcycles for notable companies throughout the country. I guess when I look back on it the job itself wasn’t so terrible. I started out in the retail store, working unpredictable, not-so 9-5 hours, but still having plenty of free time to search for a “real job.” After about a month, I transitioned to working in the shipping/factory department. This was definitely a step up from retail for three reasons: 1) Annoying customers were a thing of the past, 2) I had weekday hours and weekends off, and 3) Dress code was non-existent. Even though I was surrounded by a handful of post grads that couldn’t find a “real job” and were stuck working mediocre-level positions at OCC, I still felt defeated. There would be days that I would work an 8-5 shift, cry hysterically on the drive home, cry hysterically as soon as I got home, and cry myself hysterically to sleep only to do it all over again the very next day. I can’t imagine how annoying I was to be around (Special thanks to my family and friends for their support, love, and patience. I was a special case).

By November, I had a walking case of PMS (if that was such a thing). I barked when people asked me the time, cried when I saw someone post a status about how they “finally found a job!,” and acted irrationally to even the slightest bit of advice. I’m serious, it was bad. Finally, I met with a few NYC-based staffing firms. They seemed nice, and I was hopeful, but the last thing I expected was for this to be how I landed my first job. Once again, I was dead wrong. A few weeks after I met with a recruiter, I saw a job posting on their website, scheduled an interview with the company, and got the job within a week of applying. Imagine that.

Fast forward six months, and I’m still at the same company. I currently work as an Administrative Receptionist for an Executive Search Firm in Manhattan. As most 20something’s will tell you, it’s not a dream come true. The hours are long and my four-hour-per-day commute doesn’t make it any better (yes, I said four hours). The work is dull and monotonous, the industry doesn’t excite me, and answering the phone to talk to telemarketers and delivery men is just as thrilling as it sounds. But as someone who’s tested the waters of unemployment for almost seven months, I’d take Option 2 any day.

Advice to fellow starving artists: Don’t give up on your craft. You are so young. I know it’s easy to forget, between the lingering memories of college tugging at your ear and bills piling on your lap every month, but it’s the truth. You have time to reach your goals and see your dreams through, so don’t get down on yourself because you’re a 23-year-old receptionist in the wrong industry. Take this time to figure out what you want. Make a plan. Start small. As for me, I write every day. Thanks to this amazing blog, I’ve found an outlet for my opinions and a sisterhood of talented young women who want the same things I do. I’m always on the prowl for editorial positions, wherever they may be, and I am confident that my career as a writer will pan out. As someone close to me once said: “You have your whole life to live; don’t waste it rushing everything.”

Thanks Dad, I knew I got my wisdom from you. 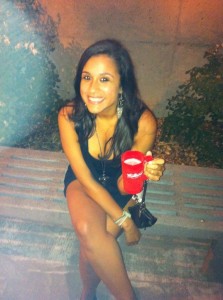 Where Are They Now? Two Years Later: Samantha Matt