Sooo, if you are all up on your PLL ‘A-game’ like me you probably already know that Spencer has an encounter with ‘red coat’ on tonight’s season finale of Pretty Little Liars! She also looks like she showered, put on makeup, and is wearing normal clothes… so, like, did she leave Radley or something? Ugh. Only a few more hours left until we find out. 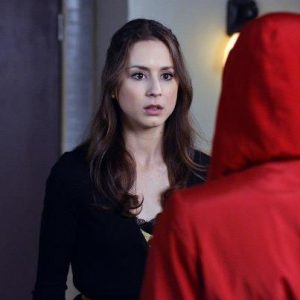 So who is red coat?! That is a question I’ve been asking myself for a while. And boy have I developed a theory or two about who the creepy Ali-impersonator is (like, is it in fact Ali herself?).

When trying to figure out WHO red coat is, you first need to decide whether red coat is good or bad. I, for one, actually have no idea. I’m assuming red coat is bad because he/she/it seems to be associated with the A team. But maybeeee red coat is good. Maybe red coat is bitching Spencer out because she joined the A team and that is sooo wrong of her. Maybe there are more than one red coats. Maybe red coat is a symbol like it was in Schindler’s List but, like, that’s me getting off topic and weird… so, without further ado, here are my suspects for Red Coat and why I think they may or may not be the culprit:

I totes think it is her because in the books Ali had a twin, so we all know how that works. However, I don’t expect them to fully follow the books, so who knows. Ali’s twin could have been jealous of Ali and killed her and is now trying to destroy her friends… OR Ali’s twin maybe took Ali’s place when she was little (remember the 6 year old ghost girl from the Halloween episode that went to Hannah’s house?) and now Ali is either trying to 1. get revenge by being on the A team or 2. is working against the A team to help the girls. The only way I see red coat being ‘good’ is if it’s Ali… but who knows.

So red coat could for sure be a guy. Maybe he stole Ali’s wig and is pretending to be Vivian Darkbloom (best name ever, btw). Or maybe he was wearing a blonde wig. These girls only saw red coat’s hair and decided it was a girl.  So who knows. Also — I think Wren is evil, so that’s a thing.

Perhaps she is being blackmailed too. We know Mona blackmailed her once, wouldn’t be surprised if it happened again. WEAR THIS RED COAT, DSULL. WEAR IT.

Like my theory for Wren, he could be Red Coat. That’s probably the only person I can see Spencer getting shocked to see. MAYBE, maybe Toby is using Red Coat as his way to see Spencer again and tell her he really isn’t evil… Or maybe that’s me being way too optimistic. Toby wore a du-rag in juvi. He obv wants to kill a bitch.

She’s always been a creepy betch. She’s always involved in Rosewood drama and pops back up at the most random moments. She is also another person I could see Spencer acting surprised to see… and honestly, she doesn’t even look surprised in the sneak-peak-picture. She looks more upset and confused. Like totally dumbfounded. And that’s probably how I would feel if my sister, who I’ve been suspicious of multiple times before, was revealed as red coat.

I haven’t forgotten about you yet, Jenna! I mean where did you even go? Do you really think we believe that just because you transferred schools, you are totally uninvolved with all things Rosewood? Doubtful. I don’t really know why you’d be red coat… but I could totally see it happening.

That would just be way too obvious. She’s blonde, kinda looks like Ali, and apparently isn’t a huge fan of Ali because she got her kicked out of school (which makes me wonder what ever happened with Spencer’s college app — like, are any of the girls applying/getting accepted to school?). Who knows though… Maybe they’ll throw us for a loop and give us this:

THE ENTIRE A TEAM.

Yes. This is my latest and greatest theory to the red coat mystery. Perhaps there are multiple red coats, like the black hoodies… or perhaps there is only one and being on the A team enrolls you in something such as the sisterhood of the traveling red coat. Maybe everyone gets a chance to rock it in attempts to keep Ali’s legacy going (although I’m sure she isn’t the only one who ever wore a red peacoat. It’s a pretty popular thing to have).

In addition to my ‘entire A team is red coAt’ theory, I’m now convinced these people are working for Ali because why in the world would they all hate her friends this much? Is there something in the water making everyone so damn evil? Or did the four liars do something even worse than blinding Jenna… Are they keeping a secret from us (the viewer)?! Are they the real bad guys? Did they kill Ali? Or did they try to, and end up killing her twin? And if they killed Ali’s twin (or Ali), is the alive one after the liars? I was told by a fellow fan and FTS writer, @char_fam, to re-watch scene one of the first episode in the series… It seems staged… and odd. Watch here:

After this, I watched the last scene from the first episode and it was like BAM. The liars very well may have killed Ali — whether the twin-story is involved or not!

Did I just blow your mind?

The only weird thing about this is why Mona, Toby, etc would be on Ali’s side. They hated her… Or was Ali just secret friends with everyone?

Anyway — back to red coat! As for other cast members than the one’s listed above, like the parents, Paige, Caleb, MAYA (she could still be alive… you never know.. apparently no one looks at faces to check dead bodies… only tattoos), and the four liars themselves, I don’t know if any of them could pull off red coat. But honestly — nothing would surprise me. Not even if red coat was Lyndon James.

And in other news… what is this?! It looks like SpencAr is in fact home from Radley and now in total control of her friends. Dun dun dun… 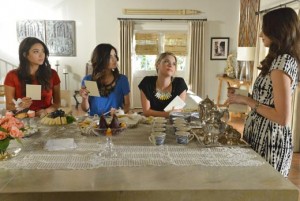 So fellow PLL-fanatics… who do you think red coat is? If you have any crazy theories, post them in the comments or tweet them to me at @forever20tweets or @samanthamatt1. I would loooove to heAr! 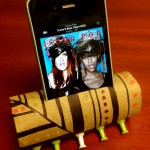 The “Retailification” of Post-Grad Life