Just when you were bitching about the cold, dreading being alone over the holidays, or perhaps experiencing your annual onset of S.A.D, Beyonce drops an unexpected album — and videos to go along with it. It was in fact the ultimate Christmas gift you didn’t know you needed. The first sentence in this album, Beyonce saying “My biggest aspiration in life? To be happy.” God bless this woman.

Here are some reasons why Beyonce is Queen Bey.

She was Destiny’s Child: Destiny’s Child without Beyonce was like a peanut butter sandwich without the jelly. I know this is one of the most overused analogies, but due to this particular meaning of the word jelly, I’m allowing myself to be cliche. Which brings me to my next point…

We Were Never Ready For Her Jelly: When Beyonce said “I don’t think you’re ready for this jelly”, she was accurate. When I first heard it, I thought to myself, “I think I’m mentally prepared.” I was not. Beyonce has so much jelly even Smuckers was like “DAYUM”

Love On Top (And Every Other Song She Sings): I dare you to listen to the song “Love On Top” without dancing, or at least cracking a smile. I legitimately listen to this song 3 times a day (minimum), and I swear I am a better person for it. If you aren’t in a better mood after listening to this, you probably don’t have a soul. Also, there is nothing more epic than the end of that song. You think she’s done. SHE’S NOT DONE.

You think her voice can’t go higher. IT DOES. So whatever you think you can’t do, just pretend you’re Beyonce’s vocal chords.

She Will Help You Get Through Some Shit: Real talk, when I was going through my worst breakup, I spent about a week crying. By the end of it, my eyes were so swollen and puffy, I looked like an Asian woman with a shellfish allergy. At a certain point, I got sick of it. I looked at myself in the mirror and I shit you not I thought to myself, “What would Beyonce do?” She would look me straight in the eye and say “GURL, get your SHIT TOGETHER”. Nothing against them, but when it came to helping me through this dark time, my white girlfriends just weren’t cutting it.  To me, there is nothing more inspirational than a strong, confident black woman.

No One, And I Mean NO ONE Looks Better In A Leotard: There’s really not much to say about this.

She Was Foxy Cleopatra (And She Was A Whole Lot Of Woman): Seriously though, there is no one else in the world who I can think of that encapsulates the essence of WOMAN. There are “women”, and then there are WOMEN. Beyonce is a WOMAN. ALL CAPS.

She & Jay-Z Are The Barack & Michelle Of Music: Not only are they the Barack & Michelle of music, they actually chill with the president and the first lady. They are a POWER COUPLE. Think about it, they are so perfect for each other. Neither one of them could just date a normie. They were both placed on this earth to meet each other and procreate. I do feel kind of bad for Blue Ivy though because that kid has some seriously successful shoes to fill. 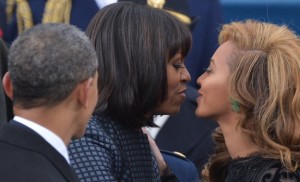 Also, this just occurred to me. If there were a lab in which you could combine two people to make the ultimate Super Woman, it would be Michelle’s arms & Beyonce’s legs. I call her Beyonchelle.

She Has Incredible Work Ethic: If you haven’t watched her documentary, “Life Is But A Dream”, go do that. Now. Not that she wasn’t impressive already, but when you see exactly how hard she works, it will make you re-evaluate some shit.

Thought Catalogue’s, Madison Moore wrote an e-book entitled “How To Be Beyonce” and it is amazing. In it he quotes an article from Honey magazine in which Greg Tate writes “She can go 14 hours without a food or bathroom break and doesn’t even think about it. Other people have to let her know ‘You know, maybe you should take a cookie break and go to the bathroom’. And that’s that crazy Virgo drive to perfection. It’s just the commitment to the stagecraft on that level.” Every time I start to feel like a waste of life, or make excuses, I tell myself “Katie, you have as many hours in the day as Beyonce”.

I could honestly go on about this for hours, but I don’t want to be a Bug A Boo. I guess my point is that, I’m just glad Beyonce exists. Like, really, really glad. 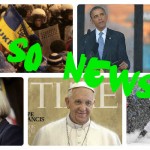 So…That Happened: This Week in “Wait…What?” 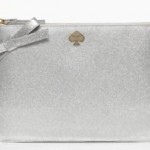 Must Have Monday: All That Glitters