With the recent news of Kristen Stewart cheating on her on and off screen lover, Robert Pattinson, people everywhere are wondering why? Why did you do it? And why did you publicly announce your mistake like he’s actually going to forgive you? Do you really think he will? I mean why didn’t you just lie about it like Mila did in this photo of her and scummy Ashton getting close below? You’re not secretly hooking up? Girl please… We all saw Friends With Benefits… I mean No Strings Attached… I mean… aren’t those the same?

Anyway, Kristen… Your secret lover is married… with kids. You couldn’t spare them all some peace of mind and LIE? Come on Kristen Stewart. We know you’re a celeb, but there’s no need to celebrate it.

But… we get it. You can’t help the fact you’re famous (like, your dad must have invented toaster strudels or something… or you were just in Twilight). Some random paparazzi jerk (prob the same one who is being sued by the Biebs) took pics of you cheating on your BF with an older, married man (who is also behind-the-scenes famous)… and since people love reading about a good (possible) affair in US Weekly, these pictures could not go to waste. They had to instead be put on the cover of every trashy magazine out there for us average folk to stare at while in line at the grocery store. And that’s not your fault. 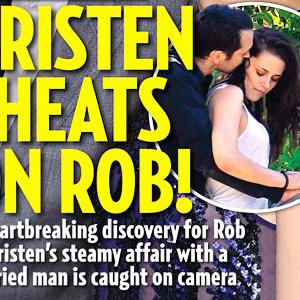 In fact, it sucks. If I cheated and got caught by someone, said someone probably wouldn’t start taking pictures of me to put all over Facebook (the average person’s US Weekly). Maybe – if they knew who I was (and that chance is slim) – they would send the pictures to my boyfriend or a couple of friends to stir up some gossip. But not many people care what I do. My boyfriend cares and sometimes my friends and family care. But that’s about it. And if I did cheat (codeword: if), I wouldn’t have to make a public announcement on Twitter saying sorry to people. No one effing cares. It’s my life. The only person I would have to say sorry to is my boyfriend, because he’s the only one who deserves the apology… unless I cheated with some dude who had kids and a wife (coughkristencough) – then I would prob say sorry to them too. But not publicly. Sh*t is embarrassing! Rob is probably lying in bed lifeless with red eyes from crying all night repetitively pressing snooze on his cell phone alarm wondering if this is all just a dream… but why do we need to know that?

Kristen was a role model to all those little Twihards. Are teens going to view cheating as acceptable now because Bella did it? Are they going to obsess over polygamy like they obsess of vampires? I mean, if the world watches Rob go back to her like she supposedly expects him to, they might. ‘I can casually hook up with an older man and still be loved by my BF?! Awesome!‘ -Teenage girls everywhere. None of these kids care about the marriage that was ruined (like who cares about the people behind a movie? we only care about the stars, duh)… They only care about the drama-induced star studded ‘relationship.’

People cheat. End of story. It sucks, but you move on. Getting cheated on is probably one of the worst feelings ever – whether your GF had a one night ‘thing’ with a random guy she met at the bar… or your BF spent months telling another girl he loved her while saying the same to you… It hurts. And when you’re the cheater in a serious relationship, you hurt – but in a different way (and certainly not as much). You’re most likely confused about life. You don’t know what you want, but unfortunately it’s most likely not the person you’re with (sorry Rob). And, sadly, you’re bound to do it again. And again. And again. Unless you maybe grow up (but that’s a rare occasion).

So, US Weekly, we get the point that celebs are just like us. Us average people cheat and get cheated on… but the difference is that no one f*cking cares. I wish you the best Kristen, Rob, Rupert, Liberty, and kids. But ultimately, I don’t really care.

However, I just wrote a decent sized article based on your drama… so, umm, maybe I do?

The Post-Grad Burn Book: 7. Professors Who Made False Claims About Post-College Life

Flashback Friday: The Top 10 Male Teen Heartthrobs From The 90s