Unless you’re living in a soundproof bubble that prohibits access to television, online media, and pop culture in general, you’ve probably heard of the AMC sensation, Mad Men. And unless you’re not remotely interested in the swanky lives of sinfully attractive New York advertising executives, you’ve probably fallen head over heels in lust with Don Draper and/or Roger Sterling. But if you’re a real fan of the show, it’s not just these two strapping older gentlemen that do the trick for you. No, no, it’s much more than that. If you’re a Mad Men connoisseur, you’ve fallen for someone else. No top hat or briefcase, no gold-trimmed drinking glasses, no impromptu sleepovers with unidentified mistresses; none of that, because you’ve fallen for a “she.” 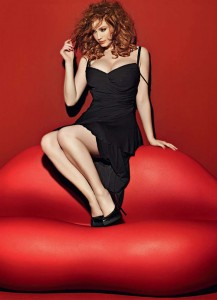 Her name is Joan Harris and she does just fine with a pencil skirt.

Let’s just assume that you are, in fact, living in that soundproof bubble and have no comprehension of what the two words “Joan Harris” mean. Allow me to educate you on the gold-necklace-wearing, no-nonsense-having, making-office-work-look-sexy-thirty-something red head who has seduced us all (yes girls, especially us).

Obviously this is my first reason. From NYC billboards to magazine covers, early-morning INSANITY workouts to late-night sitcoms, we receive constant reminders of what constitutes the ideal “feminine image.” That is, according to underfed media junkies. Well, according to the producers of Mad Men, for 99% of the male population, and yours truly, skinny is out and curvy is everywhere. And who better to exemplify the curvy girl revelation than Joan. I mean, look and see for yourself. I swear you won’t be disappointed.

Power: over everyone; even her bosses.

Let’s look at the facts. Joan is an office manager. She reports directly to Roger and Don; and yet, she somehow has this inherent command over the entire office. She runs the damn show, and they all let her. Is it her voice that seals the deal—that soothing, persuasive tone she’s got no matter what falls off her lips? Or maybe it’s the assertive, masculine-meets-feminine strides she takes when distributing the mail. Truth is, I can’t decide which one it is. All I know is the girl’s got it.

Yes, nine times out of ten, she’s tough as hell. She will put you down when you’re wrong, smash a vase over your head when you’re being a jerk (I never liked Mr. Harris that much anyways), and fire you when you’ve crossed the line of no return. But she possesses another quality, too—a soft spot. It doesn’t poke its head out very often, and its rewards are only redeemed by an elite few, but it exists. When she cares about someone, she doesn’t let up. And when she loves, she really loves. She puts her guard up for a reason—she’s a woman living in a man’s environment. But when the curtains are drawn and someone close to her loses their footing in the world, her hand will be the first one they can hold onto for stability. Trust that.

She’s that friend who always tells you the truth, no matter how harsh or ugly it may be. Does that skirt make you look fat? Yes, Joan says it does. Will I ever get a promotion? Unfortunately, it doesn’t seem likely. She will tell you exactly what’s on her mind, whenever it enters her mind, despite your feelings on the subject. She doesn’t tolerate bullshit, so don’t expect her to hand you any in return.

Passionate: about what’s important to her.

This is what does it for me; that fiery passion of hers that comes out when you least expect it. When she feels an emotion, she feels it to the fullest extent. Anger, frustration, affection, compassion—she invests herself into each of them, or all of them, depending on the situation in which she finds herself. When your company is on the verge of total collapse, she will be there with a bottle of gin and a typewriter. When you have a heart attack in your office because the random blonde woman is too much for you to handle (I couldn’t make this up if I tried), she will be the first one to make sure you’re recovering. When you’ve proven to her that you are worth her time, energy, and sometimes love, she’ll put everything on the line for you.

This is Joan Harris: A woman who cannot be easily ignored. She’s your office fantasy. She’s stubborn and ferocious; confident and brilliant. She’s your nightmare on heels. Her words will rip you to shreds and her smile will leave you speechless. Men love to love her, women love to hate her, and well, there are those who hate to love her. But she’s got them all wrapped around her finger, just like a leading lady should.