While watching Jersey Shore last night, and realizing that the plot never changes, I asked myself “why I am still watching this?” The answer to that question is probably the same answer you would give for still watching too – Not only did I not have anything better to do on a Thursday night, the show is like a horrible car wreck that you have to watch even though it makes you cringe. Although we continue to watch and make fun of the cast on a regular basis, we must remember that by doing this we are 1. making them more famous than they already are, 2. giving them more money to buy more BMWs (even though they still seem to live with their parents in their mediocre homes in NJ and NY?!), 3. making MTVs’ ratings higher than the networks’ ratings, and 3. forgetting that the entire cast is full of twenty somethings (except Mike who is like 50 years old)… and if  you your friends were taped living together, sharing rooms, and being drunk – the show would probably be just as bad (and by bad I mean good).

The bad things about Jersey Shore is what makes the show so genius. As long as the cast members keep f*cking up their lives, ratings will go up.

2. Deena’s large pink frock (It did not work for her).

3. Snooki’s headbands (Is it supposed to be cat ears or a bow?).

4. Snooki’s headbands do not match her outfits (actually, her outfits don’t really match – and what were those furry boots?).

5. Ronnie and Sammi are back together (I actually kinda like this in a “I-know-it’s-wrong” way).

6. Snooki totally cheated on her BF with Mike.

10. Twinning (those twins totally had to sign releases. ugh, reality television… where is the reality???). 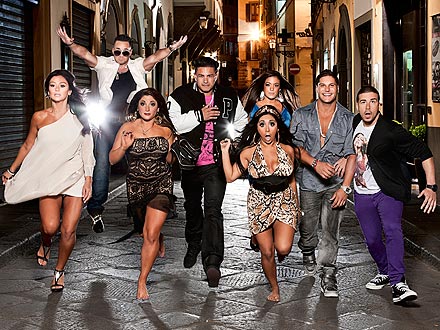 Finance Tips from a Shopaholic: 10 Steps to Save $ on a Recent Grad’s Budget

Twenty-Somethings: Are We Living The Dream?