For some reason, many of my pre-teen peers and I sang in the chorus during middle school. After being forced to take it through elementary school, we were given the choice to take chorus or band in our new school. Due to failure playing the recorder (wtf was that thing? hot cross buns anyone?) in the 3rd grade and then failure again playing the flute (who did I think I was? Ron Burgundy?) in the 5th grade, I chose chorus. When I was 5, I recorded videos of myself singing ‘I Just Can’t Wait To Be King‘ and everyone loved it, so I assumed I had a decent singing voice. Right…

Why we all thought taking chorus was a good idea, I don’t know. I mean, not everyone is musically inclined – no matter how much they love listening to it. I, for one, love music. But that doesn’t mean I can sing. So why torture me and make me sing in a class surrounded by my peers during the meanest years of our lives???

Not only was this class extremely embarrassing, but it was also hurtful. The teacher divided the class into three groups: girls with ‘high voices,’ girls with ‘low voices,’ and boys with… voices. I don’t think I had a problem with this at the time, but I should have. I mean WTF. You’re going to tell a bunch of 12 year old girls that are experiencing PMS for the first time that they have low voices and sound like men? Seriously? I mean, maybe a lot of girls thought like this. Fortunately, for me, I was one of the girls with a ‘high voice’ (thank god)… so maybe on my high horse I didn’t notice my friend sounded like a man.

Here are some of the songs we sang in the high school auditorium while dressed in black and white looking like we were catering a Bat Mitzvah:

– Ob-La-Di, Ob-La-Da – The Beatles. I have two memories of bras in middle school: 1. In the 8th grade when I forgot to wear one (that was a horrible day). and 2. In the 6th grade when we got to sing about them. I had no idea what this Beatles song was. All I knew was that we got to say ‘bra’ multiple times and it was hilarious and I have no idea why. I understand the word ‘penis’ being funny back then… but ‘bra?’ I don’t get it.

– The lonely goat herd???? WTF was this shit? I still have no idea. I don’t even care enough to look it up on Google. All I know is we had to yodel. Why? Seriously… why???

– Colors of the Wind: A Disney classic. I was excited when we got to sing this song because I already knew all the words (my dance team danced to it the year before) and I felt really f-ing cool. However, although I do love Pocahontas (who doesn’t?), I still wish we sang the Mulan song instead. You know… ‘I’ll Make a Man Out Of You.’ (Lets get down to business… to defeat… the Huns…)

– Let The River Run – Carly Simon: The only reason I remember this song exists is because my dance team also danced to it the year we sang it. I was excited because again I knew all the words – but I still wish we sang Carly’s other song, ‘You’re So Vain.’ That would have been hilarious.

Anyway, this may all sound ultra ridiculous (and that’s because it is), but despite all the ‘bad stuff,’ middle school chorus actually helped to prepare me for the real world. Sometimes you have to do things you don’t like (take tests, write papers, your first job, being nice to people you hate). And sometimes you have to do things you aren’t good at. And by doing something I’m not that good at, I learned how to have self-esteem and confidence. In fact, I wish they made you do it through high school. Wait – no I don’t. But I look back on my middle school self and wish I still had the guts to sing and do other brave things in front of people… Because now singing in front of people is only okay if I am blackout drunk on stage with a microphone at a hole-in-the-wall Sake Bombing restaurant that has karaoke. But actually, I think that’s fine with me… and my friends and family too… 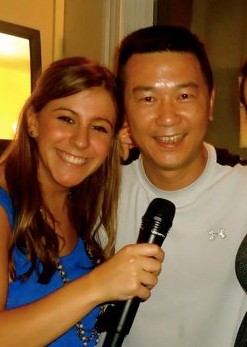 10 Things That Piss Me Off