Pretty Little Liars is hands down the best show on television. Okay. Maybe not. But it’s up there. Basically, if you’ve never watched, the show is a drama-filled mystery with edge-of-your-seat thrills. Like, you can’t watch PLL in the dark. Or alone. You will never fall asleep. Ever. 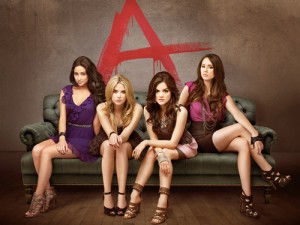 A few years ago, Alison DiLaurentis – the queen bee of Rosewood High – was murdered. Hanna, Spencer, Aria, and Emily were her little minions, but the mysterious murder brought them apart. A year after the murder we find the girls in a different light. Hanna used to be ‘chubby’ (even though she is still thin in the flashbacks), but lost ‘a lot’ of weight and became the new queen bee with her partner in crime, Mona. Spencer continued to be a wealthy, nerdy bookworm… The only difference between her old and new life is that she had more friends before. Aria was a badass hipster who loved to read and occasionally died the tips of her hair pink. And Emily was straight.

Now, with the same anonymous stalker/texter/life ruiner, the girls have a bond stronger than ever. Thanks to this terrible person (or people) they became BFFs again. Throughout the series, Hanna starts spending less time with Mona, which makes her jealous. And she gets a new BF Caleb, which makes Mona even more jealous. Spencer is still a huge nerd, but is super trendy and dates the oh-so-ugly Toby (who the show creators still believe to be super hot… I don’t get it). Toby is actually the brother of Jenna, who became blind due to Ali and the girls (this is still a secret though). Aria is still a badass, but not in the my-hair-is-pink way anymore… she dates her high school English teacher… and he hasn’t been arrested yet. Three seasons later, we’re still waiting for Aria’s 18th birthday. And finally – Emily is now a hot lesbian who loves to swim.

The girls have accused many people of being A… however, deaths, hospitalizations, and arrests always lead us to figuring out their presumed A isn’t the real A. Last season, a jealous/psychotic Mona was believed to be A… We thought the mystery was finally solved. But this season, we already know that Mona isn’t the only A. After only two episodes we know that someone else is texting the girls… and thanks to Hanna’s awk visits to the crazy people hospital, we know it’s not Mona. In addition to all this, someone pretty much roofied Emily, took her to Ali’s empty grave, and left her there to wonder where the eff the dead body went?! I mean, I’m still wondering. Why aren’t people freaking out more? There is a dead bod on the loose. I mean, come on Rosewood!

In last night’s episode, Emily gets a surprise gift from A… or whoever is trying to torture the liars now. The necklace reads ‘dead girls can’t smile.’ Are you kidding me? Emily leaves class in a panic, and of course the girls follow her which is fine because Aria’s mom is the teacher, and meet in the bathroom. They discuss what to do with the necklace, but unintentionally flush it down the toilet. Oops.

Meanwhile, the girls realize Jenna is no longer blind. Bitch is pretending. Who pretends to be blind? Someone who wants to see everything without people knowing… clearly. The girls confirm this when they are, again, in the bathroom and put an earing (that Aria received in her locker from A that came from Allie’s grave) on the sink. Jenna comes in, picks it up, and looks at it. She looks at it. She can SEE.

Aria also deals with a minor/major issue in last night’s ep as well. Meredith, the homewrecker who hooked up with her dad and basically broke up her parents (aka Jodie Sawyer from Center Stage… I hear Just Dance whenever I see her), is back… and wants to teach at the same school as Aria’s mom. Is this bitch serious? Oh, and thanks to A, Mer (I’m using the nickname like LL did in The Parent Trap) is now getting coffee with the dad. Kind of funny how it’s okay for Mr. Montgomery to see a student, but not okay for Aria to see a teacher. This is like a twisted not-okay soap opera plot.

Also in this episode, Caleb goes with Hanna to see Mona. As he waits for her, he finds out that she’s been there before… as in almost every day. And she’s been confiding in Wren (the English dude who used to date Spencer’s sister… who also hooked up with Spencer of course). I see Caleb going HAM on Wren in future episodes. After Hanna leaves, Mona takes tweezers from her pocket and makes her finger bleed. This was a total WTF moment. I’ll say it again – WTF.

Meanwhile, Spencer keeps going to see Garrett in jail… AKA the guy who was accused of killing both Ali AND Maya (Emily’s dead GF). Spencer begins to believe Garrett is innocent and knows who A is (or are)… but her mom bans her from seeing him again. Soon enough, Spencer finds out her mother is now Garrett’s lawyer. Meaning she actually doesn’t think he’s a killer… but, umm, why? How did he convince her he’s innocent?

Lastly, Emily believes the person who kidnapped her blacked-out self (or more like browned-out self since she’s starting to remember some of the night) was Jenna. And she believes this even more when they figure out bitch isn’t blind.

At the end of the episode we see someone in a red hoodie that actually looks like a Forever Lazy (no, I didn’t forget about those). He or she is buying hoodies for a ‘team’ … or more like A’s Team. But what does this all mean?

Who is A? Or is there more than one ‘A?’ And what’s bleeding-Mona’s deal? Do you think Ali is still alive? I do. But when will they tell us? How long will this mystery go on for?! I mean seriously! I need to know.

Dance Your Way To Vegas! (With A Hpnotiq Party Pack Giveaway)