A co-worker was going to be late. Again.

You see, these things can’t be helped. Viruses. Colds. Temper tantrums. Lost shoes. Diaper changes. They can hold parents up in the morning and have them running out of the door before the work day is through.

I’d like to point out that neither can my viruses. Colds. Recurring sinus infections. Lost cell phone. Shoes hiding in the shadows of my closet. Misplaced hair brushes. The difference is I’ll stay in the office later to pick up some of the slack when you have the rush out and you can call me in early without much fuss.

We all have our reasons for being late, leaving early or not showing up at all, but my childless twenty-somethings reasons aren’t invalid. Maybe sometimes more trivial, yes, but not invalid.

One of the biggest struggles of my twenties has turned out not to be finances. (I’m a writer, so I never expected to be wealthy.) It’s turned out to be dealing with older people who think my time isn’t valid.

It was those thoughts that filled my mind when I had to postpone my planned vacation time at the last minute when a co-worker took an unplanned extra day off on a vacation that was already twice as long as any one I’d ever had.

As I seethed at my desk and tried not to snap every time someone asked me a question, I could imagine how the decision was made, “I’m sure I can take another day off, honey. I’m entitled to this time and she probably doesn’t have anything important planned.”

If anyone had even asked me, I would’ve answered, “Well, my father’s getting the first of several surgeries to stop bleeding behind his eyes, so I’d like that day off please.”

Actually, don’t worry about it. You just enjoy day seven of that vacation on the Texas Gulf Coast. I’ll text my mom for updates on the surgery.

I know, I know. They’ve worked really hard to get to where they are today and definitely deserve some time to relax and be there for their children’s milestones, but they shouldn’t forget about the young worker bees they leave in the cold. I don’t know anyone who really minds the extra work, but most do mind the cavalier attitude in which it’s dumped on their desk.

I don’t have kids, so I can’t pretend to completely understand, but from what I’ve discerned children make parents feel like their life has real meaning. That revelation and the type of love it produces is a beautiful thing, but it can make it easy to forget that life also had meaning before marriage and babies.

At this point in my life, a night spent binge-watching Scandal on Netflix can produce real meaning. An annual trip to New Orleans with my friends from college where all we do is roam the French Quarter and try not to think about what we could possibly be stepping on as we make our way through the crowd on Bourbon Street (Shoes? Purses? Lost puppies?) is a great use of my time. I can’t compare that with watching my child take their first steps, but does that mean my life has no meaning at all? Absolutely not.

But the default non-apology—“I’m sorry, but my family comes first”—makes me feel like that’s what my older co-workers think.

Fellow twenty-somethings, take a mental snapshot of your life as it is right now. Take in the small and overpriced apartment, the beat-up car, the clothes strewn about your bedroom from when you couldn’t find your red blouse earlier in the week and the dishes stacking up in your sink. But also remember the weekly dinner plans with your girls, going on a sunset stroll with your boo and watching classic movies on the couch with a bowl of popcorn.

When you’re a thirty-something that’s been fortunate enough to make a good living and reach some of her career goals, you need to remember those things. That way, when you’re on a Caribbean vacation and the breeze is inviting you to stay just one more day, you’ll think of the girl who’ll end up sitting at her desk and picking up your slack while her father’s getting surgery. Then, you’ll pack up and head home on your scheduled flight.

That twenty-something girl deserves some time off, after all.

Wait…Who’s That?: Issa (from Homeland) 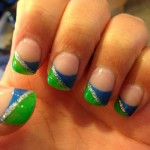 How To Up Your Game for Superbowl XLVIII: From A Seattle Based Girl