I’m convinced that the creators of social networking websites invented an “About Me” section specifically to induce stress. For those of us who take pride in our “social selves” (I think I just coined a term), it’s a lot to ask of us. Give a short and sweet summary on why strangers (and old high school crushes who since then are divorced with approximately 1 ½ children) should think you’re fantastic. And…go!

Broken down, it’s like this. Our generation can’t handle more than 140 characters at a time as it is, so you can’t write a novel dating back to how you skinned your knee that one time you fell off your Razor scooter, and how you overcame it during your teenage years. It has to be something captivating and alluring, to spark curiosity and draw viewers in. It should sound intelligent, yet sassy. If my ideal “About Me” section were a moving picture, I would be reading Hemingway while perfecting my hipster fashion as I’m winking at the guy on the corner. Oddly enough, it’s comparable to an old school personal ad; except in this case, it reads, “23-year-old Female Seeking Followers For Growing Blog.” In this case, we are seeking to promote ourselves as affluent, young adults who are inspired by the same world that we attempt to influence.

And just like that, an “About Me” section is born.

In this day and age, the adjectives, trends, and priorities we choose to advertise ourselves alongside on social networking platforms literally define who we are in the eyes of stalkers Internet friends and foes alike. She quoted a line from R.E.N.T.—must be a theatre fanatic. He took a mirror picture—clearly doesn’t give a damn about what people think about mirror pictures (or he misses MySpace). It’s ridiculous. We know who we are. The people we see on Wednesday nights or Skype with on Sunday mornings know us, not the handful that “like” our profile picture, or comment on a status about our mutual hatred for Kristen Stewart. But alas, we give in to the peer pressure of social networking and constantly find ways to improve our online personas.

Which brings me to my point (why does it always take me so long to get here?)—be it Facebook, Twitter, Tumblr, Google+, or whatever the newest craze is, I always make it a point to state that I am from New York. A quick caption might read something like, “City dweller in the best place there is,” or “New York has my heart;” basically anything that has the potential to come out of Carrie Bradshaw’s mouth. I’ve lived in New York all my life. My father was born and raised in Harlem and my mother grew up in the Bronx. They moved upstate to get out of the city and raise a family in a quiet suburb far, far away from the horn-honking and urine-stained sidewalks. I mean, I can’t really blame them for doing so given the aforementioned description, but that’s just a tiny little setback in a sea of opportunities that comprise the one, the only, New York.

Being a New Yorker is a lot like being Italian. Granted, I happen to be both of these things, but they really go hand-in-hand. We’re both proud as hell, often to the point of being stubborn and close-minded (the truth sucks, but it’s still the truth). We feel as if our identity is linked to a massive conglomerate of people who share our ethnicity or zip code. It could be a stranger walking down 5th Avenue or the local Deli owner that gets our order right before we even open our mouths—a keen sense of belonging to a particular culture that only certain people can associate with. We’re loud, we’re passionate, and we don’t take crap from anyone—be it our crazy Aunts or invasive Subway lurkers. So it goes without saying that, yes, I love being a New Yorker. I love the eccentricity of sidewalk fashion in Soho; the fresh smell of bagels and coffee; the glass and mirrors that frame it all—I could soak in it for the rest of my life.

I warn you, approaching real-life situations with this type of mindset isn’t always smart. Actually, it’s stupid, and I’ll tell you why. Because when I planned a road trip to Raleigh, North Carolina to visit my best friend with three other girlfriends, the last thing I expected was for my love of all things New York-y (ish?) to be swayed. Am I a traitor to my homeland for admitting the shocking truth that no New Yorker should ever speak of? Should I mask my face and head for the hills (or the South) as soon as this blog is posted? 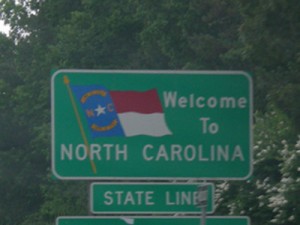 Better yet, I’ll just say screw it. I had a love affair with the South and I don’t regret a damn bit of it. Fellow New Yorkers, here’s why.

Your Accent is Thicker Than You Realize

I’ve been around it my whole life. Coffee = cwo-fee. Orange is pronounced with an “ar” sound instead of an “or.” I understand that while it may not be the correct way of speaking, it’s the way I’ve been taught to communicate and it’s served me just fine. Sure, my boyfriend mocks my accent more than he actually listens to the words flying out of my mouth, but to each his own right? I’m a New Yorker, I “twak like this,” and I expect everyone to keep up with the rate at which words leave my mouth. It’s the New York Way—quick demands with quick response times, and nothing less than that. We fail to recognize that other people (in this case, North Carolinian) don’t live this way. They aren’t always in a rush to spit out their thoughts and turn them into a reality. And no, their “caw-fee” is “coffee,” and it’s served with a side of “Good Morning, how are ya?” instead of the usual “Who’s Next?” While in the South, do as the Southerners do, and slow it down. You’ll thank yourself.

You would think that graduating from a school as geographically diverse as Manhattanville College (approximately 1,700 undergraduate students from more than 30 states and 50 countries) would have broadened my knowledge of the way people outside of New York speak. Nope, not a chance. As soon as we crossed that invisible border that separates us Yankees from the rest of civilization, all bets were off. Any conversation that I participated in during that weekend involved some sort of confused pause from me, the person I was speaking to, or both of us. The accent came to life! The exaggerated drawl wasn’t exaggerated down there—it is just how they speak. I used to think communicating with my Italy-bred grandfather who speaks in Calabrese dialect about 98% of the time was difficult, but man oh man was this tough. Then I thought back to all the times I got frustrated when tourists couldn’t understand my directions. Geographic karma does exist. You’ve been warned.

Believe it or not, walking around with a stick up your rear end isn’t customary everywhere. I know, quite shocking. In fact, Southerners have sunshine beaming out of the same spot where said stick is shoved (too visual?). Walking down the street, paying for a Vodka Tonic, dancing in the middle of a club, I found myself in the company of strangers who were actually nice? It’s a foreign concept to me, you see, because as a girl being raised in New York, you are taught certain things. Don’t talk to people you don’t know. Don’t smile at people you don’t know. Basically, migrate around the world in a bubble that no smile or greeting can penetrate. I got really good at it over the years…and then the South happened. It taught me to smile at oncoming pedestrian traffic instead of questioning why the random passerby were so fricken’ nice. Sometimes people are just spreading kind thoughts. Sometimes there aren’t ulterior motives. And sometimes, you’re allowed to smile back.

Saying You’re From New York Will Get You Free Biscuits

So on our last night, we went to a place called, “The Pit,” famous for its old-fashioned Southern BBQ. We were hyped. And as if we weren’t hyped enough for the pulled pork and coleslaw, my Raleigh friend wouldn’t stop talking about the free Hush Puppies and biscuits. We sit, we order, and there are none to be found. Disappointment faded over her face, so I had to take matters into my own hands. What was my go-to phrase all weekend? You guessed it: “But we’re from New York.” In my head, I could resolve any conflict that arose by using this phrase. No parking zone? No biscuits? But we’re from New York, so make it happen. You would think that this kind of pitiful demanding would reap zero benefits, but it actually worked. So to my very dear friends who laughed at me while “Oh man! But we’re from New York!” fled from my big mouth, you’re welcome for the Hush Puppies and biscuits (which were, of course, wonderful).

If Money Could Grow On Trees, Those Trees Would Be Planted in the South

Immediately after moving out of my parent’s house and into a 2-bedroom apartment in Astoria, I cried for two reasons: 1) I missed my family and 2) I missed my money. It’s true what they say about a New York lifestyle—it certainly isn’t cheap. From cab rides and rent to 2% milk and draft beer, everything is more expensive up here. Aside from the beaches and hospitality, the best thing the South has to offer visitors is its affordability factor. Gas is cheaper (by like, 40 cents), cigarettes are cheaper (according to my smoker buddies), lunch is cheaper (chicken sandwich, fries and Hush Puppies for less than $5?!), and homes are cheaper (and nauseatingly bigger). No wonder retirees head down South as soon as they hit that golden age! I’m in no rush to leave New York, despite the $10 mediocre salads, but the South certainly charmed me toward future contemplation.

How would I rate my four-day Southern experience? Off the charts, for more than the reasons listed above. Travelling is more than fancy postcards and pictures in front of statues, and it should be seen as a necessity rather than an option. Yes, travelling is necessary. Experiencing another culture is necessary. Immersing yourself in different languages, foods, customs, fashions—it’s all necessary. How can we expect to learn and grow if we are confined by familiar surroundings? How can the depth of our knowledge expand if we are limited by comfort zones and state borders? I encourage people to travel, even if it’s only a long weekend getaway to a part of the country you’ve never been before. Leave your normal environment. Get burnt by the Carolina sun because Jersey’s isn’t the real deal. Slow it all down for a change. Have a misunderstanding with a waitress because your Northern voice said “American cheese” and her Southern ears heard Cheddar. Do it as often as you can. Save money for a flight to Greece instead of those designer heels. Globalize yourself. Engage in aimless conversation. And please, don’t be afraid to fall in love with a new place.

If ruthless New York can welcome be back into its bed after sleeping with endearing North Carolina, every other place should be a piece of cake.

Flashback Friday: The Evolution of the Instant Message

Why Twentysomethings Can’t Have It All